By some serendipitous coincidence Irish historian Brian McKernan found my blog and read one of my very first blogposts: The Lover Archetype and Friend Monkey (I).

I wrote back then that George W. Russell’s (AE) did not reciprocate the romantic feelings of young Pamela and that he failed to make her feel special as a woman, a statement I based on the fact that he wrote to her about his other interests and flings. From that assertion I extrapolated that his attitude reaffirmed Pamela’s childhood experience of not being lovable enough, and then, I concluded that the relationship remained platonic because AE was emotionally unavailable.

My assumption about AE’s emotional unavailability as the primary reason for the platonic nature of the relationship between him and young Pamela prompted McKernan, who has spent the last couple of years researching AE’s life, to reach out and offer a different perspective. The ensuing correspondence gave nuance to my understanding of their relationship. But, before I offer you some snippets from our correspondence, a word about McKernan’s work.

McKernan’s initial goal was to read about AE “to build up a basic story about him so that his birthplace-Lurgan, could hear his story.”  It appears that AE despite his numerous contributions to the Irish society has been largely forgotten by the public. 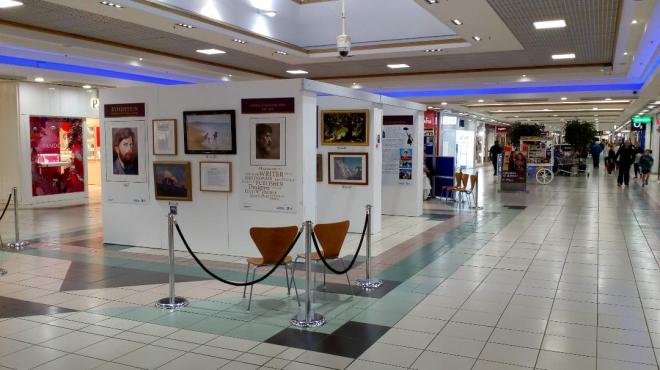 McKernan hopes that the memory of AE’s life and achievements will inspire the younger generations and maybe even reverse the sad reality of Lurgan. Today, says McKernan, Lurgan is “socially divided (Catholic/Protestant, Nationalist/Unionist) and the suicide rate locally among young people is so high, the place needs a role model, a hero they can all celebrate together, and which tells them their town has some greatness in its DNA.” An honorable mission.

After spending considerable amount of time immersed in the world of AE, McKernan developed a true appreciation of his genius. His admiration grew as he realised that AE “acted differently from most men” because of his spiritual beliefs and visions which made him experience life on a different level than most men.

McKernan explains that AE considered ordinary human love to be of an ephemeral nature. He aspired to a higher, more lasting spiritual connection:

AE understood, as we all generally do, about romance, lust and temptation, but he believed so much in a higher love, where two people’s spirits meet, that he forced himself to hold back from the lower base human lust. He wrote a poem ‘The Spell’ in which he directly addresses the opportunities coming his way (sex, lust, romance) and how feeling that he is too old for this is pretty annoying. He regretted letting Pam (P.L. Travers) down. He regretted letting others down. Sometimes he wished he could just let himself succumb to temptation.

Now as I lean to whisper

To earth the last farewells,

The sly witch lays upon me

The subtlest of her spells:

Beauty that was not for me,

The love that was denied,

Now melted from their pride:

They run to me in vision,

All promise in their gaze,

Madness of nights and days.

These gifts are in my treasure,

Though fleeting be the breath;

Here only to wild giving

Is love made fire by death.

This spell I put upon thee

Must, in thy being burn,

Till from the Heavenly City

To me thou shalt return.

About AE writing to Pamela about his other crushes, McKernarn writes:

As for his ‘other flings’ and writing about them, that was not something he did a lot, but with Leah Bernstein, Simone Tery and Pamela he enjoyed their attention, like forbidden fruit, and they enjoyed this little bit of nonsense and fun too.

There was nothing false about the relationship says McKernan. “AE was simply reluctant to romance the outer Pamela and preferred the more lasting spiritual bond to Pamela’s inner self. And Pamela was reluctant to “jump all over him for a brief breaking down of a slightly awkward and hindering barrier”. The bond between Pamela and AE was strengthen by their shared similarities. “Pamela shared so many similarities with AE – like her sharp wit, innate intelligence, deep and sincere spiritual outlook.”

Anyhow, one thing is certain, AE’s influence was transformative and tributary for setting the course of Pamela L. Travers’s life as a writer and for the creation of Mary Poppins. McKernan writes:

He (AE) completely welcomed her into his world and circle of friends – something she needed. Before this transformative friendship began, she was floating quite aimlessly, with no sense of place. He gave her full acceptance and status.

In her essay The Death of AE: Irish Hero and Mystic, Pamela writes about her relationship with AE. “I do not know in which role he saw me, as a daughter, acolyte, apprentice, or as all three…” “Was he intentionally educating me, I wondered! No matter: it was being done, with or without intent.”

Despite the initial infatuation, the relationship evolved into one between a teacher and his student and lasted until AE’s death ten years later. Their bond extended to AE’s son Diarmuid Russell who became Pamela’s literary agent and then to Diarmuid Russell’s daughter Pamela, who was named after her.

All this indicates that AE appreciated young Pamela enough to resist the initial temptation. He was wise enough and aware enough of his personal situation, age, his marriage to his ailing wife and, of course the fact that Pamela wanted a life he couldn’t give her. It is possible then that he wrote to her about his ‘other flings’ precisely because he wanted to maintain a certain distance in order to preserve a lasting relationship. He played the role he knew he could fulfill, that of the guiding mentor.

Pamela wanted to be a poet and it was through poetry that she met AE. However, McKernan notes, it was AE who finally moved her from poetry to prose, “just like he moved his friend William Butler Yeats from Art (painting) to poetry”. If it was not for AE, McKernan believes, there would be no Mary Poppins for us.

He helped her to develop the characters, plots and stories which became the Mary Poppins’ books. Although he had never accepted any financial gain for helping his protégés, he did accept a share of her first Mary Poppins’ royalties in 1934 as he had been so involved in the process.

In my next blogpost I will tell you more about the connections between AE and Mary Poppins as revealed by McKernan.

Hope you’ll come back to read more about Pamela L. Travers and her Mary Poppins. 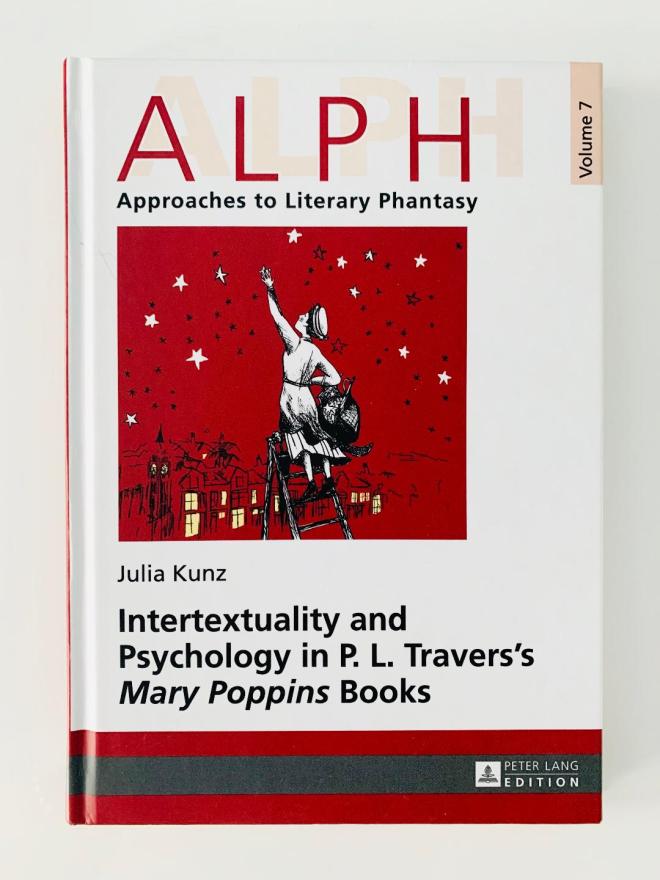 Julia Kunz’s book Intertextuality and Psychology in P.L. Travers’s Mary Poppins Books is a short, scholarly work written in a very straightforward manner. It is a must read for anyone who is interested in the Mary Poppins books, and like me, in P.L. Travers’s creative process. The pages of this book are filled with accurate observations and I believe that P.L. Travers would have been pleased with Kunz’s analysis of the Mary Poppins’s stories, except maybe for Kunz’s comments about Gurdjieff  (P.L.Travers’s spiritual teacher) in chapter seven.

There are two threads in Kunz’s book as the title itself suggests. One leads towards an explanation of the conceptual interconnections between the Mary Poppins stories and the childhood readings of P.L. Travers, and the second leads the reader towards a short demonstration, in the light of Freud’s concept of the ‘uncanny’, of some psychological aspects in the Mary Poppins stories.

Apparently, the method of connecting psychology and literature in order to extract meaning originates with Freud, and thus Kunz’s psychological analysis points to repressed childhood wishes expressed in the Mary Poppins stories. However, she does not connect the psychological features of the stories with P.L. Travers’s psychological struggles.  But then, there is so much to tell about P.L. Travers and her Mary Poppins, that clearly one book can’t cover it all.

What is intertextuality? It is a concept used in the literary field. Literary scholars view any given text as a network of texts, which implies that authors don’t create independently in a vacuum, but rather link, consciously or not, previously read literary and non-literary texts.  Kunz’s thesis is that some of the Mary Poppins stories (from the first four books of the series) can clearly be linked to Peter Pan, Alice’s Adventures in Wonderland and the works of E. Nesbit, and of course, to fairy tales.

For example, and without any spoilers, Kunz links the story of Halloween* with the shadow of Peter Pan, Alice’s chaotic experiences down the rabbit hole with the strange adventures of Jane and Michael, and the story of the Marble Boy ** with Nesbit’s book The Enchanted Castle.

Kunz also makes extremely interesting, in my opinion,  parallels between Nesbit and P.L. Travers’s life experiences. Apparently, both these authors experienced early childhood trauma; Nesbit just like P.L. Travers lost her father at an early age and had a difficult relationship with her mother. Both had an interest in spirituality and esoteric teachings, and both led quite unconventional lives.

In her work Edith Nesbit then attempts to revive a female mythology, drawing on the theosophical writings of Helena Blavatsky and Annie Besant (cf. Knoepflmacher 1989, 320), just as Travers instils her writings with the esoteric teachings of Gurdjieff, whose cosmogony is in part linked to that of Blavatsky.

I was pleased to read Kunz’s assertion of the value of the Mary Poppins books for the adult reader.  Kunz points to one obvious fact, yet one that is still largely disregarded by the public:

P.L. Travers transmits her knowledge to the reader on an unconscious level. The Mary Poppins stories tackle universal problems in symbolical ways but also with the help of parables and fables modeled on the traditional fairy tale structure.

The conclusion of the book is that the Mary Poppins stories offer an endless ground for exploration, and that is something that fills me with joy and encouragement.  This year I am revisiting the Mary Poppins books with the intention of compiling my own ideas and connections and hopefully writing the book I’ve been dreaming to write since I started blogging about P.L. Travers and Mary Poppins.

* A story in which shadows are having a party on the lawn outside of the Bank’s house.

**A story about a marble statue that comes to live.