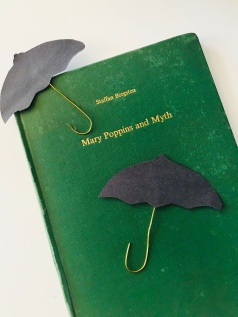 Mary Poppins and Myth was written some forty years ago by Staffan Bergsten, a Swedish scholar who after reading the Mary Poppins books* to his young daughter became aware of certain connections which appeared to him to be pointing in the direction of the possible inspirational sources for the adventures in the Mary Poppins stories. Bergsten decided to explore these connections. With that purpose in mind, he initiated a correspondence with Pamela L. Travers which lasted for a period of three years until the publication of his thesis in 1978 by the Swedish Institute for Children’s Books.  Bergsten tells the reader right from the start that his book is a comparative and analytical study and that some of his ideas “were knocked on the head by Pamela Travers, but others were confirmed”.

So, where did Pamela L. Travers find the material for her stories? Bergsten did not provide a definite answer to the question.  He concluded that it was:

highly doubtful that she had any clear conception of what sources she was drawing upon. Her comprehensive reading had sunk into the depths of her mind and the ideas, forms and happenings rose into her consciousness in the shape of spontaneous imaginative creations.

This reminded me of a comment made by Pamela L. Travers herself in a recorded conversation with British author Brian Sibley that took place many years later. In that recording Brian Sibley commented that in the Mary Poppins stories “there is also a number of very serious adult concepts and thoughts” to which Pamela L. Travers responded:

They are underlined, I find those afterwards. I don’t put them in. Not long ago I was reading for the first time since it was published Mary Poppins in Cherry Tree Lane and I was overcome, how did this writer know my inmost thoughts, they are not said, they are not spoken, but they underlie the texts. And then with surprise I realised it was me. Well, I suppose it was me.

I enjoyed reading Mary Poppins and Myth, the writing style is fluid and without any scholarly stuffiness. Bergsten had a genuine interest in the subject of his thesis and he wished to share his understanding of Pamela L. Travers’s literary work. He examined the Mary Poppins stories from three different perspectives: psychobiographical, literary and mythological.

Bergsten perceived Pamela L. Travers as someone who looked at everyday life in the light of myths and fairy tales, a habit he speculated, she acquired early in childhood through her extensive reading of fairy tales.

So, in Pamela Travers’s childhood memories we find everyday figures and objects together with literary and mythical allusions, and this is the blend we find in all her books. Everyday realism and mythical stylization infuse each other not according to some worked out scheme but simply because this is the author’s own way of experiencing reality.

The accuracy of Bergsten’s remark is confirmed by Pamela L. Travers’s childhood recollections written in some of her essays published in Parabola years after the publication of Bergsten’s Mary Poppins and Myth. The descriptions of Pamela L. Travers’s childhood experiences are original and appear to have happened in some borderline reality between the world as we know it and the world of the fairy tales. Now, of course one can question the authenticity of theses memories and argue that Pamela L. Travers romanticized the facts and retold them many years later, after she had acquired vast knowledge about myths and fairy tales.  That may be, but the sensitivity and love for the fairy tales was in her blood and that explains the longevity of her Mary Poppins.

Staffan Bergsten also sensed that Mary Poppins encapsulated a “whole series of projections of more or less unconscious, sometimes contradictory, tendencies and ideals in the author herself.” But then he admitted that to speculate in that direction it will “lead into psychological and biographical questions and in the meantime at least there is not enough material of the kind that would let us discuss them further.” Pamela L. Travers was notoriously secretive, and the personal details of her life became public only after her death with the publication of her first biography, Mary Poppins She Wrote by Valerie Lawson. Consequently, the psychobiographical examination is quite brief in Bergsten’s book. However, it is clear that Bergsten regretted the lack of available biographical material.

Bergsten classified the Mary Poppins books in the category of the fantastic tale because the adventures take place in the everyday reality which exists alongside a supernatural reality. And, although the natural laws do not apply in this parallel reality, logic remains present in all the adventures.  Bergsten also explored the possible links between other children’s books which were popular during Pamela L. Travers’s childhood such as Alice in Wonderland and Peter Pan but the connections, he concluded, were quite thin.

Bergsten also noticed the poetic influences of Yeats, Blake and Wordsworth (Pamela L. Travers’s favourite poets) in the Mary Poppins stories in the themes of the “the glorification of the child” and its “innocence and imaginative power”. This probably motivated his interpretation of the main purpose of Pamela L. Travers as a writer, namely, to awaken and stimulate the inner child of the reader. Now I wonder if this was one of his ideas that was knocked on the head by Pamela L. Travers.

Bergsten underlied the fact that Mary Poppins was articulated clearly around mythical elements. She comes down from the heavens and then at the end of each book she ascends up into the upper realms. She is eternal, her home is everywhere and nowhere. She can fly and be free from any confinements. Her magic is inexplicable, and above all, intrinsic. Mary Poppins doesn’t need a wand to perform her magic. The adventures also have mythical notes expressed in cosmic dances and celebrations of the whole of creation. Bergsten linked these to Pamela L. Travers’s Christian sympathies, to Gnostic traditions and to theosophical teachings and Hinduism. This mixture of inspirational sources explains Bergsten’s description of Pamela L. Travers as “a genuine and convinced syncretist who enthusiastically borrows from the most disparate cultures, religions and mythologies”.

In my opinion, Mary Poppins and Myth should be reprinted and made available to the public. It is of course possible for the fans of Pamela L. Travers and the Mary Poppins stories to find this book in a library or to purchase an old copy online.