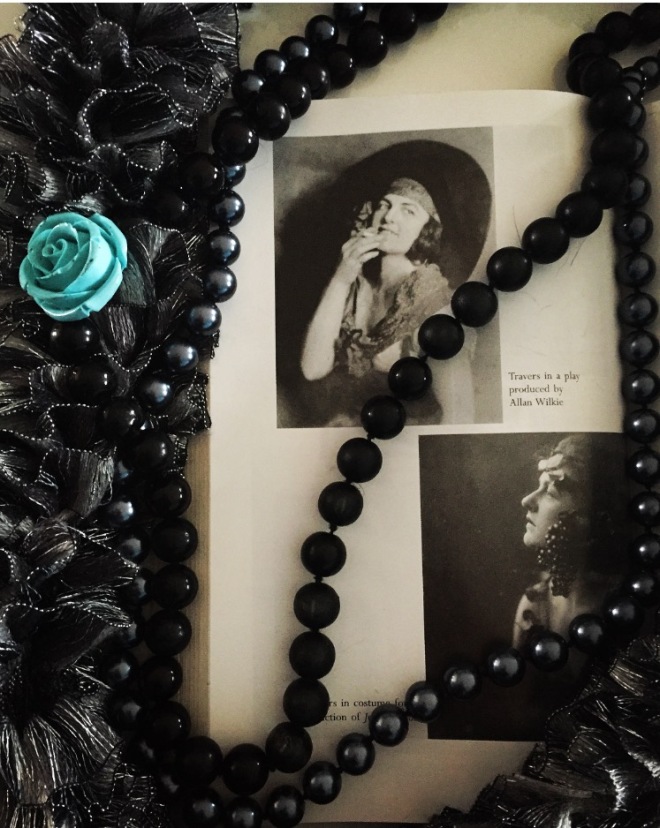 Before Pamela L. Travers, there was Helen Lyndon Goff, a lonely child with vivid imagination.

Helen Lyndon Goff discovered the world of dramatic arts in her teen years, at the time when she finally accepted her father’s death, a painful experience exacerbated by the mental breakdown of her mother and the domineering presence of her spinster great-aunt Ellie.

Although, at first, her mother and her aunt opposed to her acting attempts, in the spring of 1921 (when she was about 22 years old) Lyndon joined an acting company and briefly toured Australia and New Zealand.

According to her biographer, Lyndon felt her name was not romantic enough and decided to take up a stage name. She chose Pamela, a name apparently in vogue at that time, and she chose as her last name her deceased father’s name, Travers.

Now, it is not unusual for artists to choose a stage name. Often the motivation behind such a choice is the perceived unattractiveness of the performer’s name, the difficulty to pronounce or spell the name, or because another notable individual uses a similar name, or simply because the name in question projects an undesired image.

At first glance, in the context of her acting debut, Lyndon’s change of name fits well into this concept.

♥ But the curious thing about her stage name is that it remained even though her acting career was short-lived. Indeed, in 1922, Pamela met a young journalist in New Zealand who lead her to a new life as a journalist and a poet. So from a stage name, Pamela L. Travers, appears to have morphed into a pen name.

Pen names, in a similar way to stage names, are usually used to make the author’s name more distinctive, to disguise his or her gender, to distance an author from some or all of his or her previous works, to protect the author from retribution for his or her writings, to combine more than one author into a single author, or for any of a number of reasons related to the marketing or aesthetic presentation of the work.

♥ Yet, somehow, I feel that her pen name is more than a pen name.  To me, there is a deeper meaning, a symbolic meaning, in the decision of changing her name. And I got the confirmation of the correctness of that feeling while reading one of Pamela L. Travers’s interviews published in The Paris Review, No. 63:

“I have a strong feeling about names, that names are a part of a person, a very privative thing to each one. I am always amazed at the way Christian names are seized upon in America as if by right instead of as something to be given. One of the fairy tales, Rumpelstiltskin, deals with the extraordinary privacy and inward nature of the name. It’s always been a big taboo in the fairy tales and in myth that you do not name a person.”

And then again in “Name No Name”, published in Parabola in 1982:

“So-the name discovered, the named one is lost, or at least deprived of his power.“

Could it be then, I asked myself, that by taking up a new name she was trying to come up with a new identity, to start afresh and release inner feelings of inadequacy? Could it be that she never felt comfortable enough in her real name, as if Helen Lyndon was just not good enough and needed to be hidden from the world ? Why else would she experience “an inner trembling” when people used her Christian name?

♥ I believe that Pamela L. Travers’s name change was an attempt to escape the painful experiences of her childhood: the early loss of her father, the weakness of her mother, the heavy burden of the family financial needs, and what seemed to be her  future role as her mother’s helper.

Discussing Pamela’s acting experience in Mary Poppins She Wrote, Valerie Lawson makes the following comment: “The stage fulfilled cravings in Lyndon for applause. Somebody, even if it was an audience of complete strangers was now paying attention to little Lyndon. She longed to do this all the time.”

If Pamela appreciated the applause, I believe that was because the audience’s  attention operated as a temporary substitute for  love and emotional connection. The truth is, she didn’t crave applause, she craved love. And isn’t it a curious coincidence that the Greek translation for Pamela is “all sweet” or “all loving”?

When her father was still alive, she and her sisters were just like “lumps in the family porridge.” The family life was organised around her parent’s moods. “It was clear that they had their own existence – busy, contained, important.“

After her father’s death (Lyndon was 7 years of age) everything began to revolve around her mother’s emotional needs and the survival needs of the family.  So in the following years, from a lonely child Lyndon became, as the oldest of her siblings, a sort of pillar for her mother; “That seemed to be my role and I wondered if there was anything else for me in life.”  She ended up rejecting this role on February 9, 1924 at 11:30 am as she sailed off to England in search of a new meaning for her life.

As the years went by, her pen name gradually changed from Pamela L. Travers to P.L. Travers, and in the late years of her life, to simply PLT.

I believe that Helen Lyndon Goff experienced a major blockage during the maturation process  of her psyche caused by unattended childhood wounds. What were those? That will be the subject of my next post.