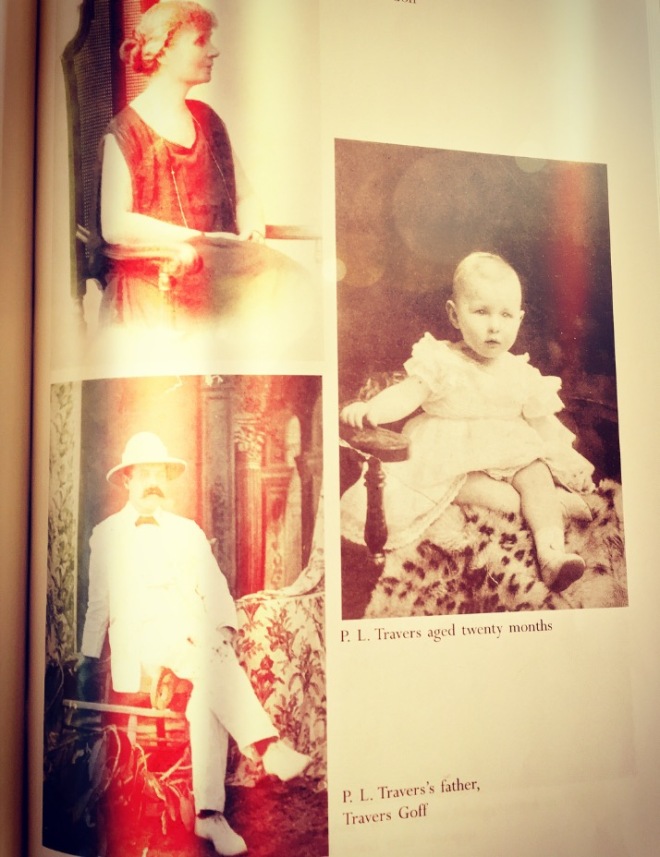 This week’s post explores Pamela L. Travers’s childhood’s wounds. I am using information from her biography Mary Poppins She Wrote as well as some of Pamela’s own recollections from her childhood which she chronicled in a few essays compiled in her last book What the Bee Knows.

I believe that Pamela was deeply wounded in her early childhood and that these wounds exerted tremendously destructive powers over her life. Out of these wounds stem Pamela’s beliefs system which governed her life choices. I will go as far as to assert that her entire literary work is about these early wounds and her effort to heal them.

♥  Simply put, Pamela L. Travers experienced the devastating powers of Helen Lyndon’s (Pamela’s real name) shadow. The unsatisfied child’s needs remained somewhere hidden in the darkness of the unconscious mind. And how can you see a shadow in the dark? Well, you can’t. You need light, light of consciousness, just as much as the shadow does, because  by leaving it in the dark you are denying its existence. And we all know that it hurts not to be seen and not to be heard.

Pamela expressed this truth beautifully in her essay, “About the Sleeping Beauty:”

“Powers such as these, at once demonic and divine, are not to be taken lightly. They give a name to evil, free it, and bring it into the light. For evil will out, they sharply warn us, no matter how deeply buried. Down in its dungeon it plots and plans, waiting like an unloved child, the day of its revenge. What it needs, like the unloved child, is to be recognized, not disclaimed (not refused acknowledgment). Given its place and proper birthright and allowed to contact and cooperate with its sister beneficent force. Only the integration of good and evil and the stern acceptance of opposites will change the situation and bring about the condition that is known as Happy Ever After.”

I suspect that little Helen Lyndon felt as the unloved child, not worthy of love and at the same time longing for it. Wronged and revengeful, she also felt shameful and deserving of the mistreatment. Coming up with a new name did not relieve the inner torment.

♥ Torn between opposites, this is how I believe Pamela would have summarized her experience of being alive.

Pamela’s parents kept her warm and fed but that was the extent of their nurturing skills. They were her landscape and she was part of theirs. The following quote encapsulates succinctly their parenting style. “Arguments yes but no explanations. I cannot remember that he, or anybody else, ever explained anything. It was clear from their general attitude that our parents had not very high opinion of our intelligence but at the same time, apparently, expected us to know everything.“

Undoubtedly, Pamela’s parents sent ambiguous and confusing messages which, combined with the emotionally charged events of her father’s early death (Pamela was seven years old) and her mother’s suicide attempt (when Pamela was ten), could not have done otherwise, but leave permanent marks on her developing psyche.  Yet Pamela’s resolute refusal to blame her parents for the pain they caused little Helen Lyndon is remarkable. And even though she says that the “…parents are the child’s first gods and responsible, whether they know it or not, for many seeds of fate“ she also says that “with awareness blame arises.” And then in another essay she asks rhetorically,  “But why lay all our troubles on parents? They provide a door for us into life; that, and nurturing, is their function. Afterwards, it is up to us. We can’t blame them if the door opens on scenes we hadn’t bargained for.“

Travers Goff loved to tell his family and friends tales of ancient Ireland filled with elves, fairies, and pixies, and apparently, the more he drank the more romantic the stories became. “He had Ireland round him like a cloak”.  But Goff was not Irish. He was from London, a city he left in his early twenties for the tea plantations in Ceylon. From there he relocated to Australia where he founded his family.

I wonder, did he ever dream of becoming a rich plantation owner? It is quite possible, but we’ll never really know. Maybe it was just Pamela’s imagination, but she liked to confuse people and tell them that her father used to be sugar plantation owner.  Nevertheless, it is plausible to say that his dreams whatever they were, never came true. Travers Goff worked in a bank, climbing down the ladder from a branch manager to a simple employee. The man was doubtlessly disillusioned with his life and chose to escaped in the land of fairy tales and alcohol.

♥  Pamela’s memories of her father are somewhat romanticized and embellished. This is probably because he was not around for long enough to “dwindle down to human stature” and, because of his storytelling and his love for poetry. His lyrical side must have appealed to the imaginative part of Pamela’s innate personality.

Anyhow, the poetic Goff compensated for his feelings of powerlessness by dominating his household with his bad temper.

Pamela wrote about the time when her father got furious with her because she left her rag dolls, Lady Hamilton and Lord Nelson, outside in the rain. Scared she denied forgetting them outside. “His righteousness frightened and shamed me“.

She wrote of another incident when her father gave a beating to their dog Tippu because the dog had the insolence (frankly, the misfortune) to sit on his chair. Pamela and her sisters tried to explain that the dog believed he was a little boy, a rightful member of the family. And so, her father decided to teach everybody in the household a lesson. He was the king of his castle and he was to be obeyed.

“He was Irish, too, in argument, determined to have the last word, even – or perhaps specially– with children. Criticism he did not like. And from his own flesh and blood- really it was too much.“

Pamela’s biographer, Valery Lawson, reports “Lyndon was never sure whether her father would respond to her mishaps with a joke or an explosion” or even worse, sometimes dismiss her with ridicule.

♥  How could a little girl predict and understand the impulsivity and mood swings of a heavy drinker? Nobody was there to tell her she was not responsible for his reactions, that there was nothing wrong with her. Nobody was there to protect her from his abusive behavior.

“I was never made to feel that I was anything special.“ Her father, the poet at heart, rejected her first poems as insignificant. “Hardly Yeats!” His love for poetry failed to stretch itself wide enough to encompass Pamela’s first writing attempts. It seems like in all occasions he made her feel inadequate and not good enough.

♥  Maybe she tried to write poetry to please him, to connect with him or maybe it was an attempt to attract his attention, or all of the above…whatever the motives her father failed to understand her needs.

Her biographer tells the story of Pamela’s fifth birthday. Her parents sent her away from home into the custody of stern aunt Ellie.  Her father wrote her a letter saying that he has learned that Lyndon had grown “very fat. ” “Why, little woman, you will be like a prize pig when you get home again. Never mind, we will all be delighted to see you home again after your nice long holiday. As you will be back soon we are not going to send your birthday present to you but you will get it when you return.“

Her biographer adds: ” Back home the fat little girl had only just opened her present when her mother told her she must stay with friends until things settled down. Baby Moya needed all her attention. Lyndon later wrote that she always suffered from being the eldest of three girls.”

♥  Truth is she suffered from her parent’s coldness.