In this post I want to continue the exploration of Gurdjieff’s use of meals as a function of his spiritual teachings. And, René Zuber’s book Who Are You Monsieur Gurdjieff? is just perfect for this purpose. Zuber was a French writer and photographer, and a pupil of Gurdjieff.

In her Foreword of the English translation of Who Are You Monsieur Gurdjieff? P.L. Travers qualified Zuber’s testimony about his experience of Gurdjieff’s teaching strategies as being “fresh, vivid, wholly unprejudiced” .

First published in France in 1977, Zuber’s account of his time with Gurdjieff during the German occupation of Paris was translated in English by one of P.L. Travers’s friends and a fellow member of the Gurdjieff tribe, Jenny Koralek, herself an author of children’s books. The English translation of the book was first published in Great Britain in 1980.

I purchased an old copy of Who Are You Monsieur Gurdjieff? online, without knowing anything about Zuber and the fact that he wrote his book in French, which turned out to be a lucky ignorance on my part because had I purchased the French edition, I would have missed P.L. Travers’s Foreword. Of course, I interpreted this lucky coincidence as maybe P.L. Travers sending me a wink from the beyond, but that’s just me, and I don’t expect the readers of this post to share my interpretation of this coincidence.

The reason why I chose this book was its title. I wanted to know who Gurdjieff was and a book by one of his pupils asking this same question was intriguing to me. I admit, sometimes I choose books by their titles!

Zuber’s questions “How can we think of Gurdjieff? As a musician? Choreographer? Writer? Physician? Psychiatrist? Master Cook?” remain largely unanswered, because Gurdjieff was paradoxically all of the above (without the conventional credentials) and none of the above. His talents composed a peculiar composite that defied labels of any kind. And, I believe that it is precisely because of his shapeshifting abilities that Gurdjieff was so fascinating to his pupils.

In her Foreword P.L. Travers vouched for the veracity of Zuber’s account of Gurdjieff. She wrote that Zuber’s “testimony shows him to be a perceptive and veracious member of this tribe.” I read these words as a confirmation of the resonance between her experiences and memories of Gurdjieff and those of René Zuber.

P.L. Travers wrote in her article George Ivanovitch Gurdjieff (1977-1949) about how Gurdjieff shattered to pieces the egos of his pupils to make place for the arising of  a new awareness in their consciousness.

…or assisting at one of Gurdjieff’s great feasts where, under the influence of good food, vodka and the watchful eye of the Master, opportunities were provided, for those who had the courage, to come face to face with themselves.

“If take, then take!” was one of his favourite aphorisms—no sipping, no trifling—and for many the special nourishment that was offered in addition to the delicious edibles was indigestible, hard to stomach. The exotic flavours and the vodka in which the famous “Toasts to the Idiots” were drunk (Gr. idiotes, private person, that which in myself I am) did not make things easier. But easiness was not the aim. The patriarchal host, massive of presence, radiating a serene power at once formidable and reassuring, dispensed this “food” in various ways, always unexpected; sometimes in thunderclaps of rage, sometimes telling a story that only one of all the table would know was meant for himself, sometimes merely by look or gesture thrusting home the truth. Masks were stripped off mercilessly. Beneath the exacting benevolence of his gaze everyone was naked. But occasionally, for those who could face their situation Gurdjieff, always fleetingly, would let his own mask fall. It was possible then to see that behind the apparent mercilessness stood sorrow and compassion.

Zuber’s description of Gurdjieff’s meals is very similar to that of P.L. Travers:

When Mr. Gurdjieff was nearby it was impossible to sleep in piece. Nobody was safe from being tripped up and sent flying. It is a wonder that there were not more broken bones. His table, at the end of a meal, when a great silence fell to make way for the questions of his pupils, resembled the mat in a judo club.

At first glance Who Are You Monsieur Gurdjieff? appears to be just a small booklet of 75 pages. But for me it happens to be so much more. It is a magical portal to another time and place, that of a small Parisian apartment at 6, Rue des Colonels Rénard in 1943, during the German occupation of Paris.

Here is Zuber’s description of this dark period in time:

Paris during the war, under German occupation, was in the grip of the blackout: if the slightest ray of light filtered through a window it had to be smothered quickly and the curtains more tightly drawn. The city was under curfew: no one would have dared on pain of death, to go out into the deserted streets after eleven o’clock at night. It was the reign of what we called the ‘restrictions’, that is to say, of organised poverty, with its corollary, obsession with food; not to mention the constant hammering of Nazi propaganda which tried, in vain, to rob the Parisians of their last glimmer of hope.

I don’t have a picture of the building at 6, Rue des Colonels Rénard from 1943 but I found a street view on Google, taken in April 2018. The Building is still there, and I wonder if its current occupants know of its history. 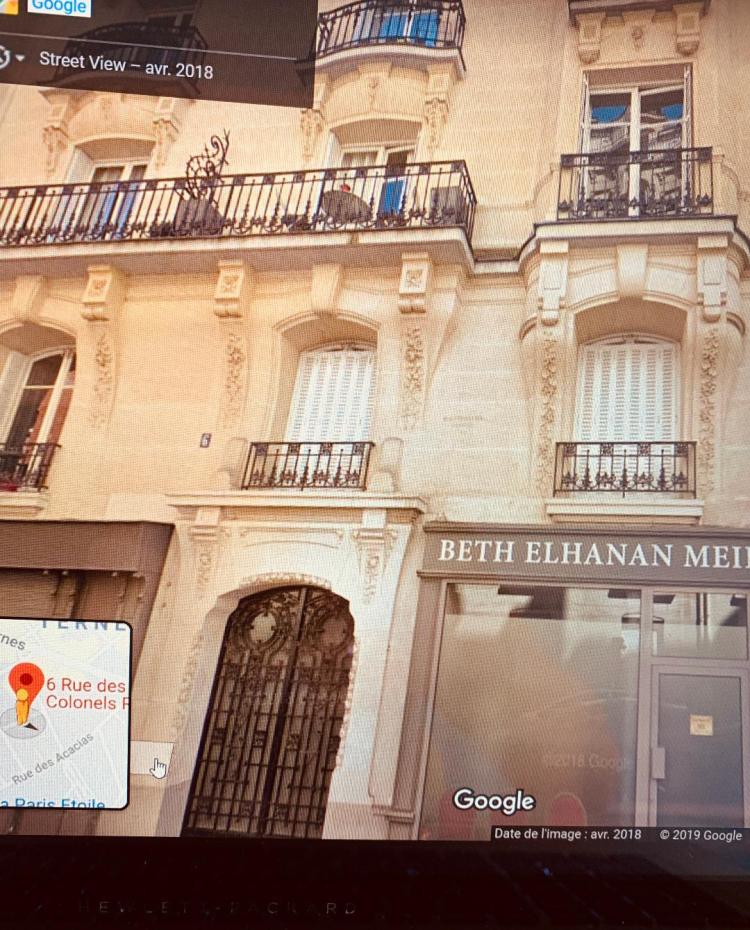 Amazingly, Gurdjieff, even though a foreigner with suspicious appearance, described by Zuber as “a Macedonian smuggler or an old Cretan capetan”, found his way around occupied Paris and always had exotic food on his table.

Not only is Who Are You Monsieur Gurdjieff? beautifully written but it is also very candid. Zuber discusses his doubts about Gurdjieff, about his need to categorize him and pin down the sources of his teachings. And despite the fact that a personal relationship is almost impossible to translate in words, Zuber’s recollections provide the reader with a vivid description of Gurdjieff’s meals and a subtle hint of what it might have felt to be a pupil of Gurdjieff.

While reading this little book I felt like a small fly on the wall of the “ordinary bourgeois dining room” in Gurdjieff’s first-floor apartment overflowing with guests sitting on “ill-sorted chairs” that “could have come from any saleroom” and listening to the conversations and the famous Toasts to the Idiots.

I’ve always wondered why his pupils submitted themselves to this humiliating exercise and Zuber gave me an interesting explanation; the ritual of the toasts was a “play of mirrors where others served as reflections of our own image.”

But could one trust these projected images? It was, I believe, a dangerous game to walk into Gurdjieff’s hall of mirrors. Maybe this is what Zuber intended to communicate when he wrote “I do not know how to sum up the highly varied impressions we experienced during these dinners.”

Apparently, Gurdjieff’s meals always began in silence; the conversations were kept for the end because Gurdjieff considered eating as a “sacred act” by which we absorb and assimilate the “first food”.

This act asks for our appreciation. It has the value of a call to order since it brings us into communion with the natural forces which we constantly forget we depend upon. It cannot be done in the way one gives swill to a pig, while the mind and feelings are given over to their own affairs or dreams.

Zuber, like other pupils of Gurdjieff report of his culinary talents. Zuber writes that Gurdjieff cooked like “a gourmet with the knowledge of a scientist. (…) He cooked scientifically, like a dietician who foresees the action on the organism of each dish, each flavouring, each spice.”

I loved reading Zuber’s description of the human chain made by the pupils between the dining room and Gurdjieff’s kitchen, the “passing the plates from one person to another, empty on their way out, laden on their way back.”  For Zuber this chain was an allusion to the “great chain which exists everywhere in the universe between substances (or energies) of different levels”.

With all distinctions as to age, size and sex abolished, the chain, when formed functioned as a whole. At one end, Mr. Gurdjieff took the dishes from the oven, carved the meat or poultry, and, with supreme authority, shared out the helpings. At the other end, the food was kept warm on plates covered by soup bowls. When this ballet was over the circle would close around, and together we would eat the extraordinary fare Mr. Gurdjieff had prepared for us.

For me the description above evoked an image of little orphans lined up to receive a bowl of soup. I could easily imagine P.L. Travers holding her place in the chain and feeling as being part of a family. She, as well as the rest of the followers, found in Gurdjieff a father figure dispensing food and wisdom. But, in order to be factually accurate, P.L. Travers was not present at these dinners 6, Rue des Colonels Rénard. At that time, she and her adopted son lived in New York.