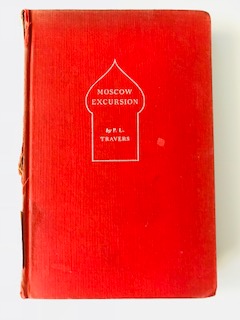 Few people know that the first book ever written by Pamela L. Travers, the author of Mary Poppins, was not Mary Poppins but Moscow Excursion. And it was not a story about magic but a travelogue about her not so magical discoveries of Stalin’s Russia in the autumn of 1932 (at that time Pamela was in her early thirties).

The book is composed of letters addressed to some unknown friend whom I personally suspect to have been her literary mentor George W. Russell (AE).  Extracts from these letters were published in The New English Weekly in 1933 and the book was published in 1934 by the Soho publisher Gerard Howe.

At the very beginning of Moscow Excursion, Pamela L. Travers confides that her entourage was quite flabbergasted by her decision to travel to Russia.

My forthcoming trip seems to be either the Chance of a Lifetime or a Piece of Utter Recklessness.” And she adds: “Nobody, it appears, can conceive that a person who is admittedly neither for nor against the Soviet regime should want to go there. And it is an acid comment upon the Communist State that both sides are at one in their conviction that it is impossible for anyone to go to Russia for purposes of enjoyment.

So, was it for her personal enjoyment or was there some other reason for her trip to Russia? This she does not discuss in Moscow Excursion. But, if one carefully reads the facts chronicled in her biography Mary Poppins, She Wrote, it appears, somewhere in between the lines, that at that particular time in her life she was trying to establish herself as a serious writer (or what she believed a serious writer should be). Until then Pamela L. Travers was publishing the occasional poem in the Irish Statesman (whose editor was her beloved mentor George W. Russell) and she was a contributing drama critic for the Australian magazine The Triad. Her initial aspirations of becoming a great poet were withering with time. The romantic/erotic poems of her twenties were not infused with the timeless sensibility expressed by the great poets she admired.

Her biographer Valerie Lawson reports that in the late 1931 Pamela L. Travers sent two poems to George W. Russell only to receive a polite rejection. He wrote to her that the poems were “well phrased but a little artificial in comparison with others of yours. You say they are simple. Yes, simple in expression but I feel they are artificial beneath that. You seem to have a hankering for Biblical symbolism which I doubt is natural. Quality is the thing my dear, not quantity.“ This must have been disappointing…

(By the way, Biblical references find their way in Moscow Excursion but that will be explored in the following posts on this blog.)

The political atmosphere in Europe in the early thirties of the last century was disrupted by the rise of the fascist and communist regimes, as described in Pamela L. Travers’s own words:

In a world rocking madly between Fascism and Communism the writer (herself) prefers the latter form of tyranny if the choice must be made. But it is a desolate alternative, for Communism in Russia is for one class of the community only and thus is hardly on bowing terms with Communism as defined in the dictionaries.

Significantly interesting fact, visits to Russia appear to have been somewhat of a trend among the constellation of renowned intellectuals Pamela L. Travers orbited around. The writer/poet Hubert Buttler, a friend of George W. Russell went to Russia in 1931. Another influential intellectual of that time who was also a contributing writer to The Irish Statesman, George Bernard Shaw, traveled to Russia where he personally met with Stalin. Shaw wrote about his observations of the Soviet State in a most positive light and it is quite possible that Pamela L. Travers had read his praise for the communist regime before undertaking her own trip to Russia.

The idea of writing political articles with the intent of establishing herself as a serious journalist could very well have been the major motivation for her visit to Russia. According to her biographer a year after her visit to Russia Pamela approached Russel for “names and phone numbers of contacts for a series of articles on Irish politics which she planned to sell to Australian magazines. Pamela was unhappy with the result.”  Even Russell told her that writing political articles was a complicated matter. I believe that she would have been a great political reporter judging by what she wrote in Moscow Excursion. I can’t help but think that the real reason for her not succeeding in the endeavor was because she was a woman, although she had said in interviews to have never felt cast aside because of her gender. But then again, she published under the name P. L. Travers….  It was also in the autumn of 1933 that Pamela L. Travers asked Russell to introduce her to his friend Alfred Richard Orage the editor of The New English Weekly where the extracts from her letters were first published. Her contribution to The New English Weekly span from 1933 to 1949, but she mainly wrote about theater, books and films.

Pamela L. Travers was apparently so eager to find her place as a writer that even her serious health issues could not stop her. In the early 1932, the same year of her Russian trip, she had to stay in a sanatorium because of a tuberculosis infection, a condition that without any doubt must have caused her deep feelings of anxiety. Her biographer, Valerie Lawson, reports that starting in her late twenties Pamela began to experience serious bouts of anxiety which escaladed to sheer feelings of dread. Going through serious health issues must have only exacerbated her mental condition.

In the light of these circumstances her decision to undertake a long trip to a controversial country can be viewed as a personal affirmation of her determination and zest both for life and writing.  A young woman travelling alone in a dangerous foreign country, the idea must have appealed to her romantic, adventurous mind.

But was it that dangerous to travel to Russia in 1932? According to her biographer, Valerie Lawson, it was not: “The journey was in fact a carefully packaged experience with little risk. Pamela traveled with a party of English tourists herded about in boats, trains and museums by a guide following a strict schedule.“ This organized tour was to take Pamela L. Travers to Leningrad-Moscow and Nizhny-Novgorod.

The trip might not have been extremely perilous but it was definitely not devoid of risks. Pamela L. Travers strayed away a few times from her appointed group of tourists and the tourist guide to go and explore Russia on her own. She wrote:

I never go out by myself without being told by a guide where I have been. How is it done? Have I a special bit of the Cheka to myself. And which is he –or she? The woman in the tram yesterday carrying one of those eiderdown bags which (judging from the faint muffled protests one hears coming from within) contain slowly suffocating babies? Or the man who was knocked down by an ambulance and left on the road to die or recover as he wished? It is no good explaining to Intourist that I have friends here and letters of introduction and that anyway even if I hadn’t I should want to be alone sometimes. That to them is the worst of evils. A good Bolshevik never wants to be alone.

However, before I tell more about her Russian adventures I must share a most interesting and contemporary piece of information.  While I was trying to find a copy of Moscow Excursion (which was not easy but proved to be possible) I stumbled on a YouTube video posted by Pushkin House in 2017, The Russian Travels of Pamela Travers: A Talk by Olga Maeots. The video is a recording of a conference given by Olga Maeots , a Russian librarian and translator, who  in 2016 published a Russian annotated translation of Pamela L. Travers’s Moscow Excursion.  I was amazed! Olga Maeots performed an incredible investigative feat and succeeded in identifying the people whose identity Pamela L. Travers willingly disguised in her book by only identifying them by single letters: T, Z, V.

It is perhaps necessary to stress the fact that the characters in the book are all synthesized personages and that I have studiously given fictitious initials for names throughout. So that should anyone, slipping among the paragraphs, imagine that he has come face to face with himself, I take this opportunity of courteously assuring him that he is mistaken. It is always someone else.