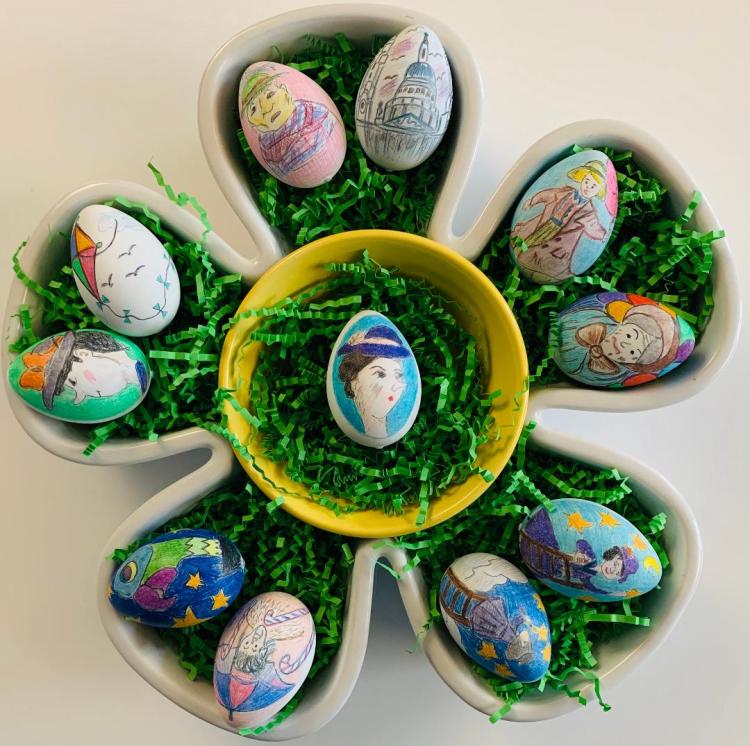 As I write this post all of humanity is under lockdown. Our frantic, busy, profit driven societies are stopped in their tracks. Survival fears are blowing around the globe and no one really knows how things will play out in the end. Of course, we all hope for the best but fear the worst. Facing the unknown is always scary. But we must, in spite of all this madness, be patient and courageous. And above all, we must find ways to keep our spirits high.

As usual, I find comfort in Mary Poppins, P.L. Travers and nature.  This blog is my grounding rod amid the storm of bad news. Daily walks outside remind me that despite our ongoing struggles the regenerative powers of nature are in motion, trees are budding, birds are singing, and the squirrels are jumping from tree to tree. Spring is here and Easter is just around the corner.

I know, it feels absurd right now to celebrate rebirth in the midst of a global pandemic. Yet, it is what we need to celebrate. We need to remind ousrselves that life is cyclical and that we are part of the larger living fabric on this planet. We are all guilty of focusing on the tiny picture of our individual lives. This is human and understandable. But civilizations have come and gone before us. What looks unprecedented today has happened, in some form or antoher, before. This too shall pass, and I want to believe that there is a seed in this crisis for a positive change.

I was not raised religiously and although we do celebrate Easter in my family, it is mostly a celebration of the coming of spring, and an occasion to get creative with Easter decorations. This year because of the lockdown I am celebrating both Easter and the coming of spring with Mary Poppins.

How? Simple, I drew some characters from the Mary Poppins stories on white plastic eggs and I baked an Easter Cake. But not just any Easter cake. I baked Mary Poppins’s Easter Cake from the cookery book Mary Poppins in the Kitchen.   Although, Mary Poppins may not be impressed by the result. My baking talents being limited, the outcome was not extraordinary. Regardless, the process was enjoyable. 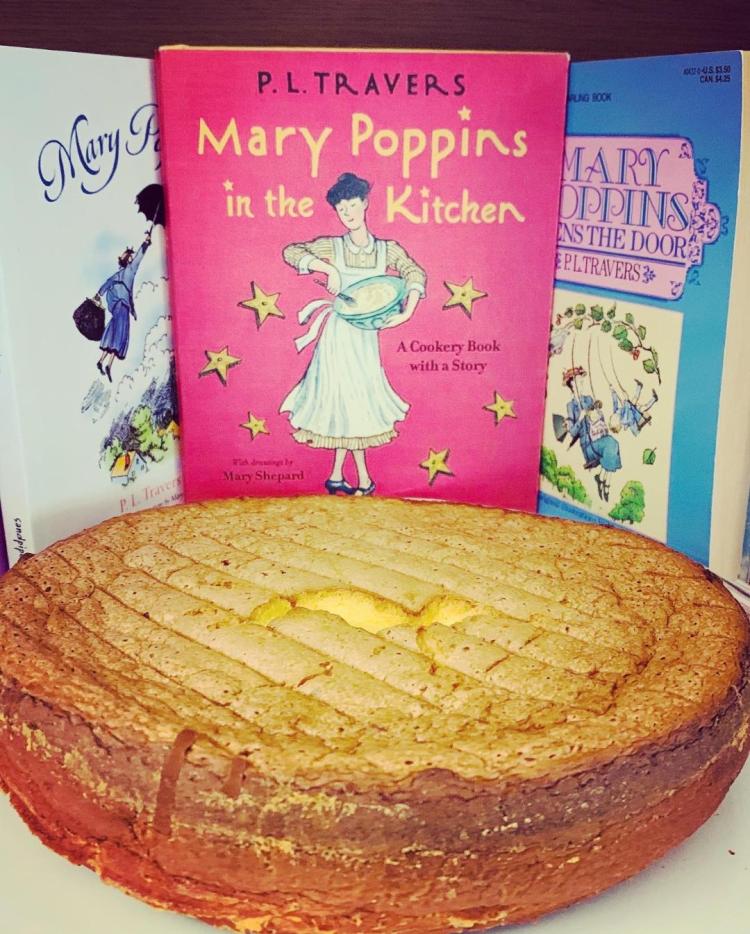 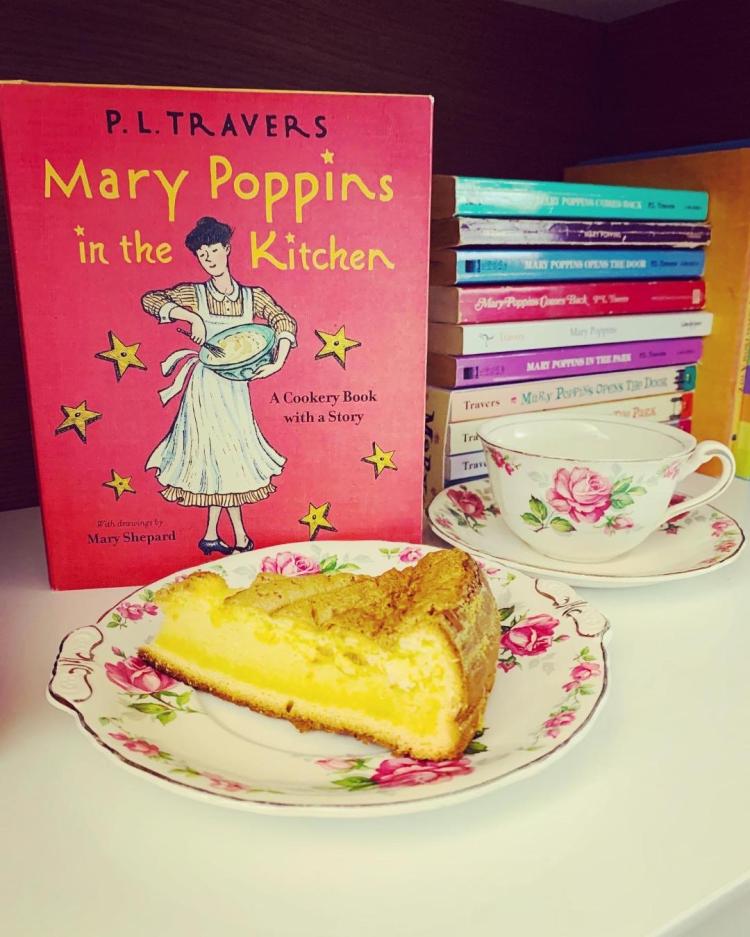 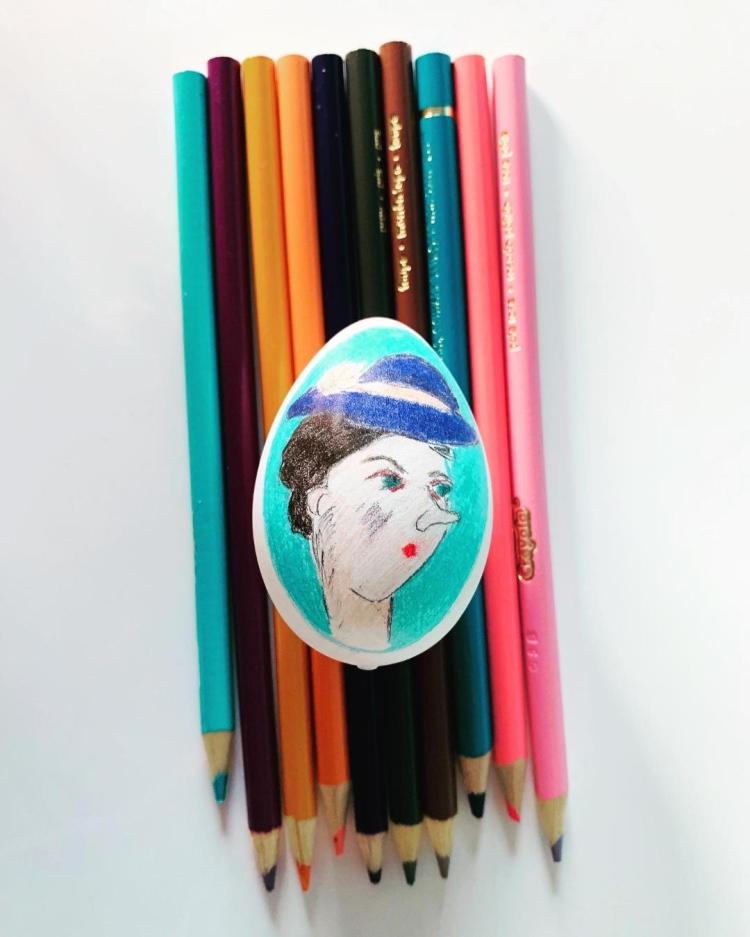 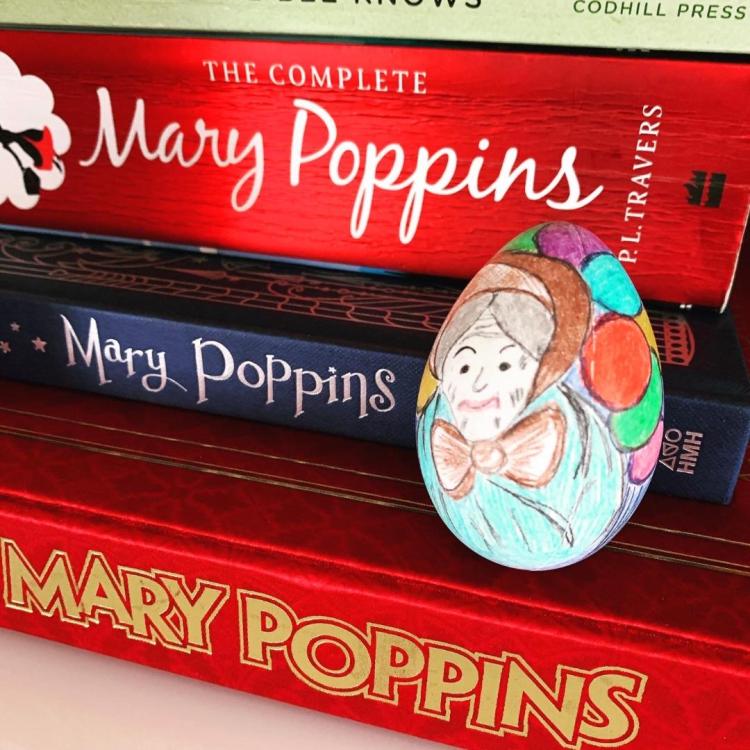 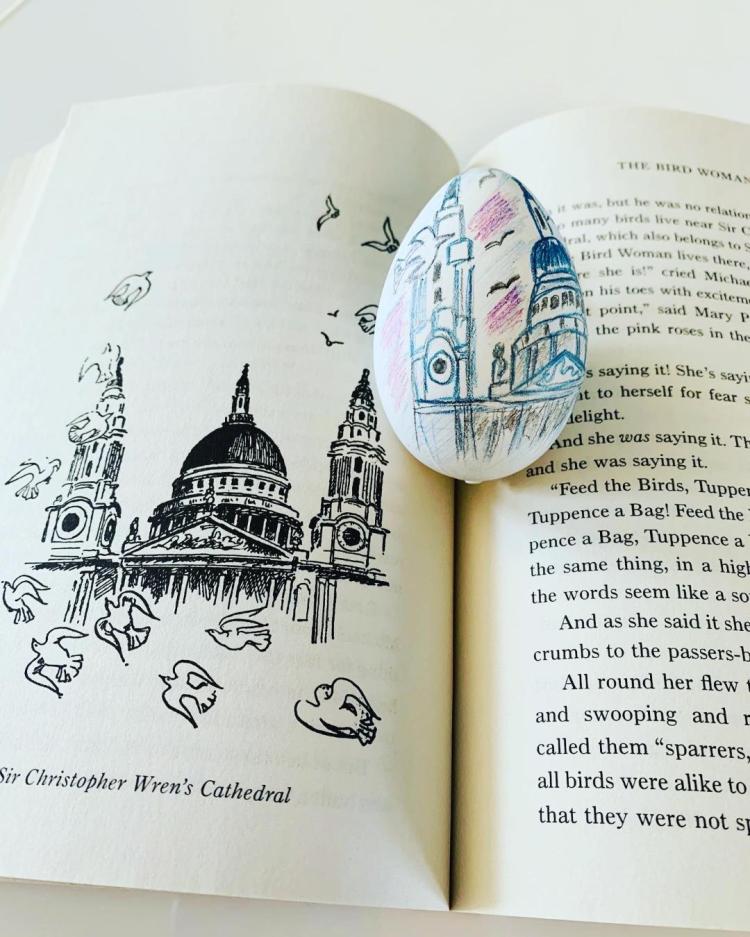 Once the eggs and cake were done, I reread Nellie Rubina, a whimsical story about the coming of spring from the second Mary Poppins book, Mary Poppins Comes Back published in 1935.

Outside it is a snowy winter. Jane and Michael are being stuck for a week inside the house.  Jane can’t take it anymore, while Michael doesn’t seem to mind it that much. He is busy arranging the animals of his Noah’s Ark.

‘I wonder why they never have any relatives’ he remarked presently.

‘Who don’t?” said Jane crossly, for she didn’t want to be disturbed.

‘The Noahs, I’ve never seen them with a daughter or a son or a uncle or an aunt. Why?’

‘Because they don’t have them,’ said Jane. “Do be quiet.”

And the fight begins.  Of course, the discord does not last long. Mary Poppins walks abruptly in the room and interrupts the altercation. Now the children are instructed to get ready because they are going out.

In the park Jane and Michael start a snowball fight and a misguided snowball falls right on Mary Poppins’s nose. In a typical angry outburst, she announces that this is the end of the snowballs. Then she throws a tiny snowball forward a few times and follows it until she  and the children arrive in front of a strange building. There is no door, only windows and a deck. The building, writes P.L. Travers, looks more like an ark than  a house.

Mary Poppins leads the way along the deck to a notice that reads “KNOCK THREE AND A HALF TIMES’’.

Immediately, as though it had been listening and waiting for the signal, the roof of the building flew back on its hinges.

Once inside the ark Jane and Michael meet Nellie Rubina and Uncle Dodger, two strange characters made out of wood and propelled by the motion of round flat disks at the very bottom of their bodies. Reading the description of Nellie Rubina, I immediately thought of Russian nesting dolls.

From her face and size she seemed to be quite young but somehow she looked though she were made, not of flesh, but of wood. Her stiff, shiny black hair seemed to have been carved on her head and then painted. Her eyes were like small black holes drilled in her face and, surely that bright pink patch on her shiny cheek was paint! 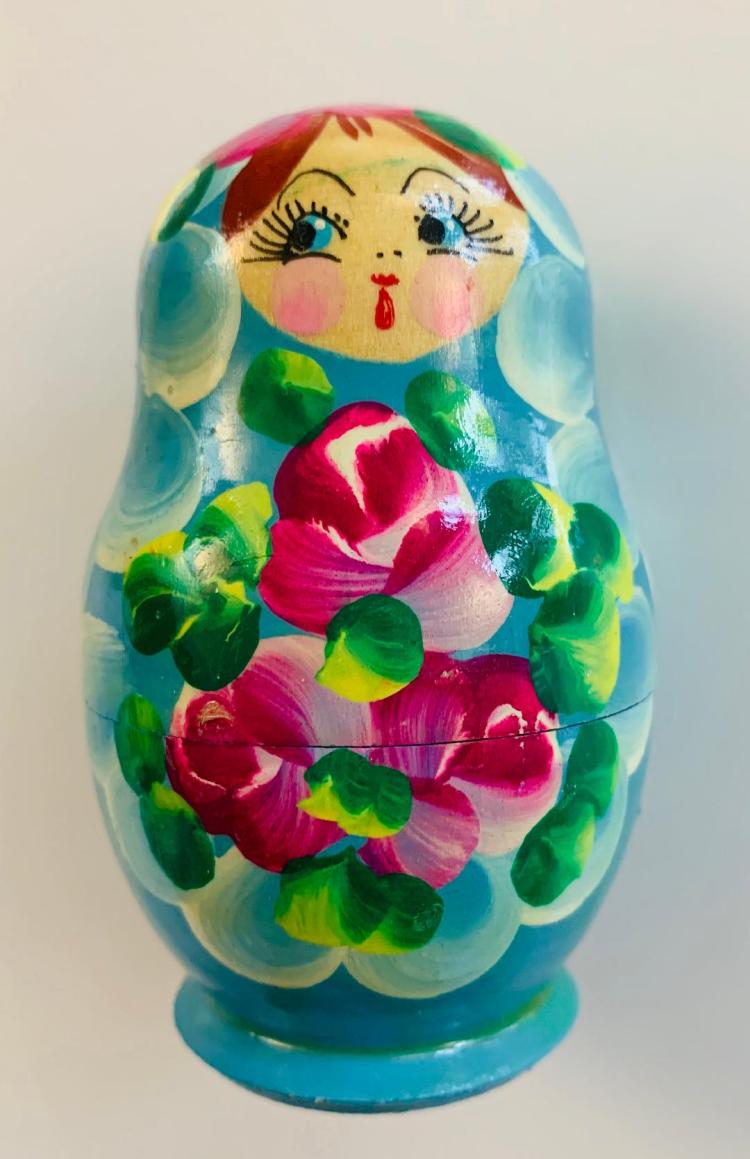 It is actually possible that P.L. Travers based her two magical characters on these little Russian wooden dolls. They were very much in vogue in Russia at the beginning of the twentieth century and P.L. Travers must have seen them while in Russia on her Moscow Excursion in 1933.

Inside, the ark is filled with tree branches, flowers, butterflies, clouds, and little lambs all made out of wood. But the purpose of these objects remains mysterious to Jane and Michael. As the story unfolds the children learn that Nellie Rubina is the Eldest Daughter and a Direct Descendant of Noah while Uncle Dodger, older and less cheerful, is only an Uncle-by-Marriage. On Mary Poppins’s request Nellie Rubina offers her guests some Conversations from a jar (sweets with inscribed messages). The children are amused.

Jane pulls out a star shaped sweet that reads “You’re my Fancy”. Michael’s is a pink, shell shaped sweet saying: “I love you. Do you love me?”.  But the most mysterious one is of course the message addressed to Mary Poppins: “Ten o’clock tonight.”  The children realize that something is about to happen and that they must stay awake to witness it.

What happens at ten o’clock is exactly what Mary Poppins announced earlier in the park. It is the end of Jane and Michael’s snowballs. The children witness a magical ritual as Mary Poppins, Nellie Rubina and Uncle Dodger summon Spring. 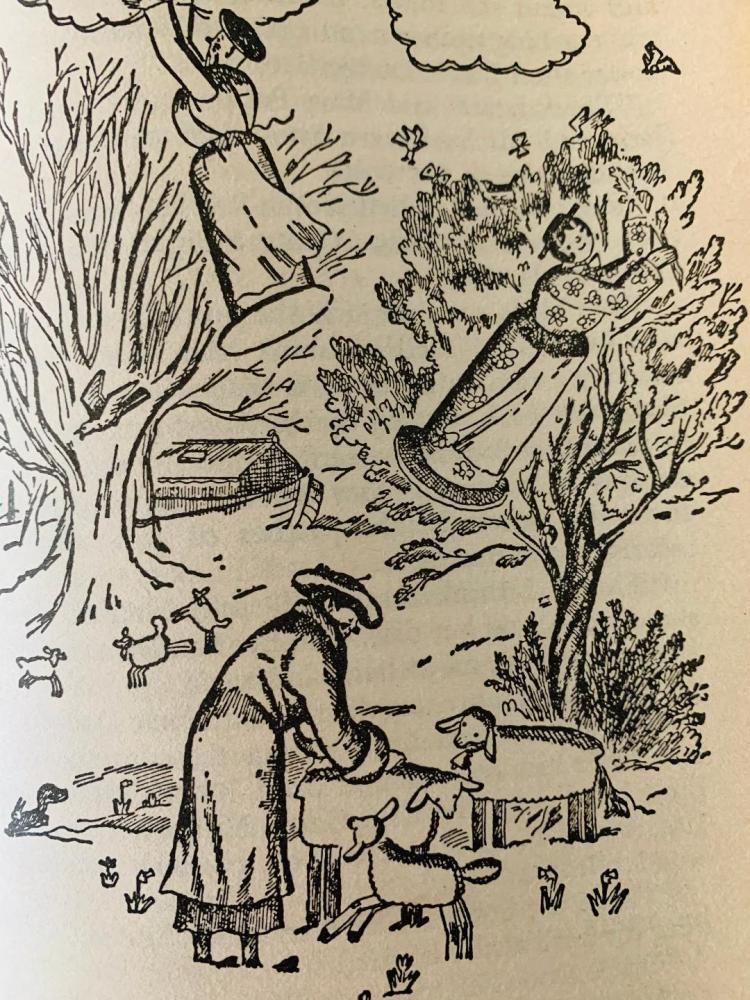 All over the park went the three, jumping up to the tallest branch as if they were on springs. And in no time every tree in the park was decked out with wooden spays of leaves and neatly finished off with dabs of paint from Uncle Dodger’s brush.

And now Nellie Rubina and Mary Poppins took up in their arms the flat white wooden clouds. With these they soared higher than ever before, shooting right above the trees and pressing the clouds carefully against the sky.

The next morning Mr. Banks exclaims “The Spring is here!”

P.L. Travers was spiritually inclined and sensitive to the invisible. She was a true master of the language of metaphor, allegory and symbolism.  It is by these indirect means that she communicated in her writings her knowledge, beliefs and questions about life. And, this is why I believe that the Mary Poppins stories, just like scripture, myths and fairy tales are primarily designed to teach. Therefore, we should not think of the Mary Poppins stories as fantasy meant to amuse children, although they certainly serve that purpose too.

The magical characters in Nellie Rubina are symbols of the invisible life forces at work during the seasonal transitions. The children in the story are learning about the natural cycles of life. But there is something more in there, something for the adult reader. It is interesting to note  that P.L. Travers chose to incorporate the concept of seasonal rebirth into the biblical story of Noahs’s Ark, an allegory about another cycle of death and regeneration. This is  a perfect example of P.L. Travers’s indirection. She was always hinting and never explaining.

And, maybe, just maybe this pandemic will be the death of greed and consumerism and the birth of authentic connection and collaboration.  Only time will tell,  but we must remember  that we have a part to play in the collective actions of our societies.