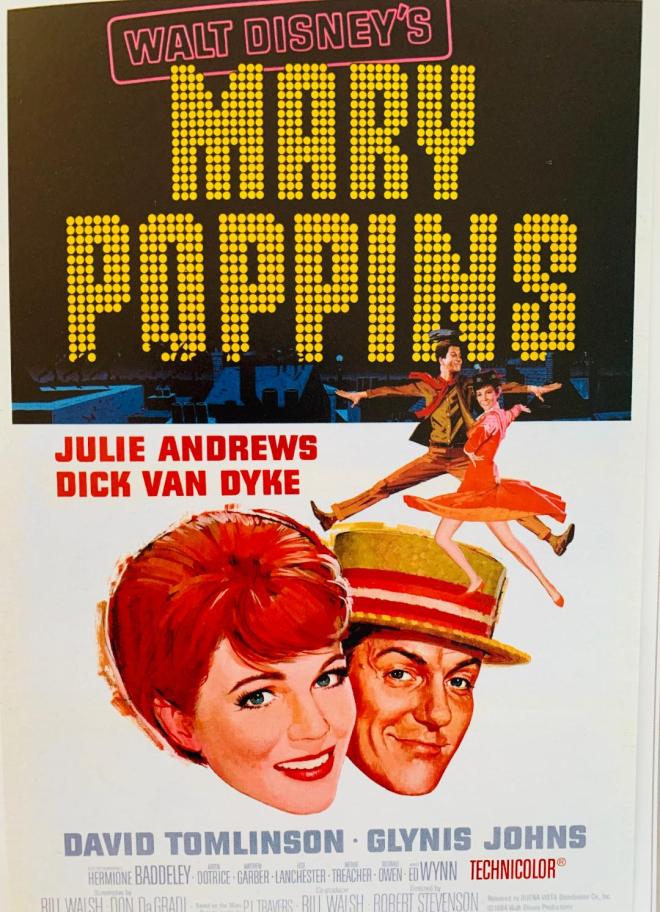 The 1964 Disney movie Mary Poppins certainly suggests such an interpretation. However, Mary Poppins’s author P.L. Travers had a different opinion and denied any romantic relationship between these two fictional characters. Who was right? Disney’s screenwriters or the author herself? The answer is not as straightforward as you may think. With the help of Irish historian Brian McKernan, I will attempt to offer a possible answer to this question.

The first Mary Poppins book was published in 1934, but a character in the name of Mary Poppins first appeared in 1926,  under the pen of twenty-seven years old P. L. Travers, in the short story  Mary Poppins And the Match-Man, published on November 13, 1926 in Christchurch’s newspaper The Sun. The story is about a seventeen years old girl, Mary Poppins, the underneath nurse of Jane and Michael and John and Barbara Banks, who on her Day Out, embarks on a magical adventure in a picture drawn by her friend, Bert the Match-Man.

A few years later P.L. Travers redrafted the story and included it in the first Mary Poppins book under the title “The Day Out”.  (If you want to read the two versions of the story side by side, click here.) “The Day Out” is also the basis of the song-and-dance sequence “It’s a Jolly Holiday with Mary” in Walt Disney’s Mary Poppins movie. 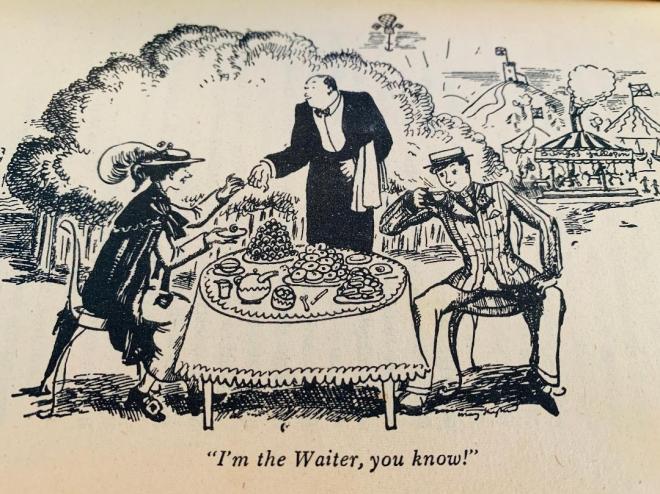 Valerie Lawson, P.L. Travers’s biographer, wrote that the fact that Disney chose this particular story as an important scene in the movie always irritated P.L. Travers.

She later called “The Day Out” chapter “false” and the weakest of all her Mary Poppins adventures, but never explained why.

Both versions of the story are rather similar. Bert has not made enough money from his paintings to take Mary Poppins out for tea and raspberry-jam-cakes. Mary Poppins tries to hide her disappointment behind a smile “with both ends turned up” and then Bert has an idea. Why don’t they go into one of his pictures? “Puff!” They go into a picture where it is “all trees and grass and a little bit of blue sea in the distance”. There they have tea, eat raspberry-jam-cakes and go for a Merry-go-Round ride. In the first story they also eat two plates of mussels which in the second version of the story are transformed into two plates of whelks. In one story the tea is served from a brass urn, and in the other from a silver one. In one story they each ride a black and white horse and in the other black and grey. In one story the Merrie-go-Round takes them to Margate and in the other to Yarmouth. But these are minor changes. 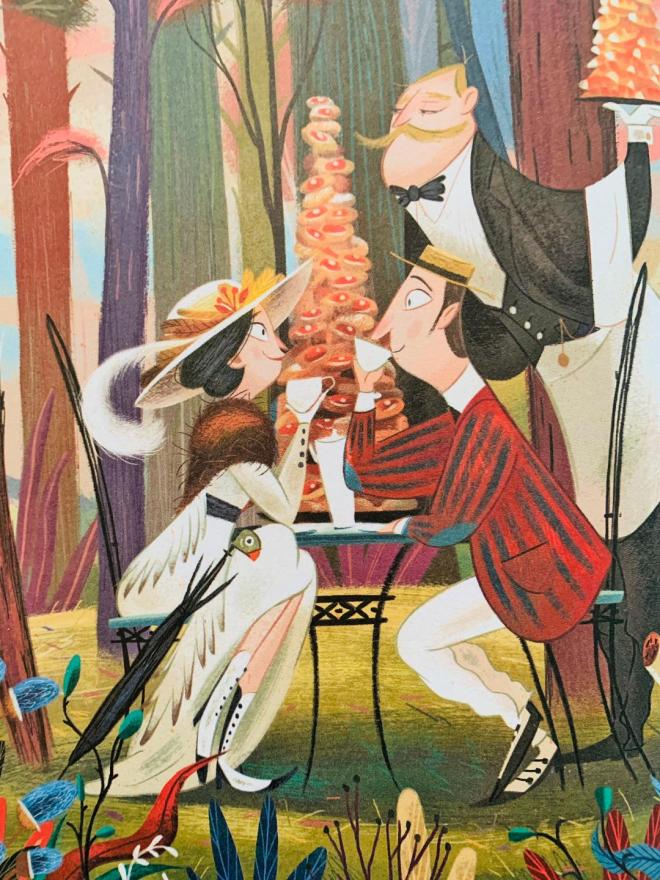 However, there is one significant change, and that is the way P.L. Travers portrays the relationship between Mary Poppins and Bert. In the first story the romantic aspect is clear:

“Mary!” he cried, and you could see by the way he cried it that he loved her.

Mary Poppins smoothed out her dress and looked hard at her shoes and smiled at the Match-Man all at once, and you knew by that that she loved him too.

In comparison, the 1934 version is not as explicit.

“Mary!” he cried, and you could tell by the way he cried it that Mary Poppins was a very important person in his life.

Mary Poppins looked down at her feet and rubbed the toe of one shoe along the pavement two or three times. Then she smiled at the shoe in such a way that the shoe knew quite well that the smile wasn’t meant for it.

Why did P.L. Travers change the story? Why was she so adamant about the absence of romance between Mary Poppins and the Match-Man? The answer, at least in part, can be found in McKernan’s reading of the 1926 version of the story. 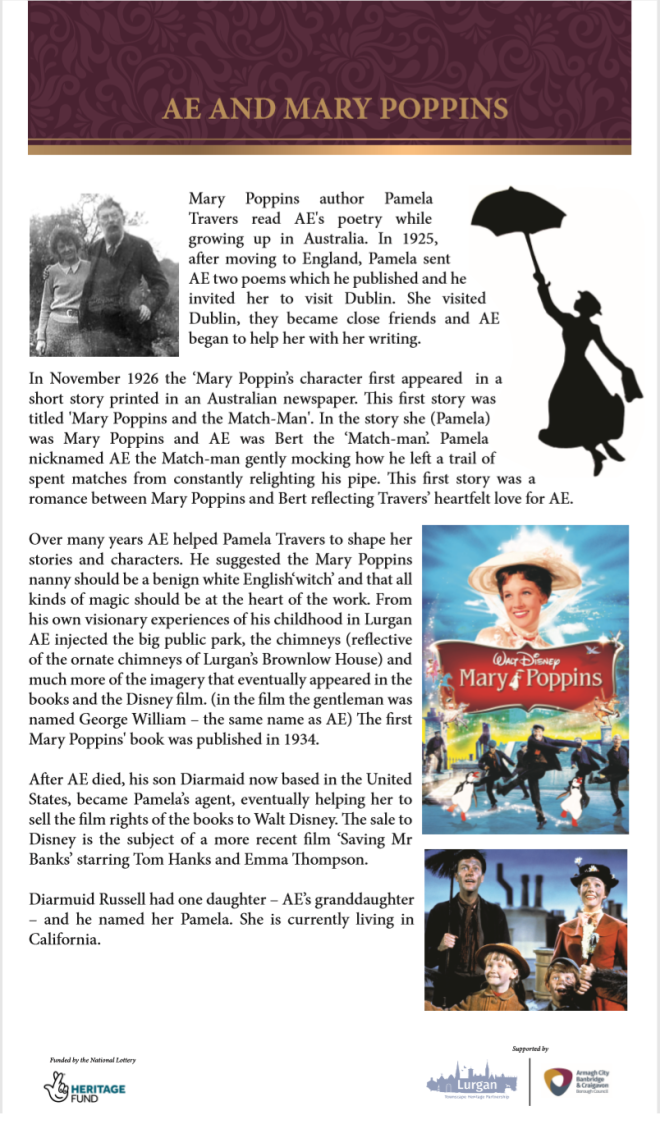 According to McKernan, the character of Mary Poppins is a personification of young P.L. Travers and Bert the Match-Man the embodiment of her literary mentor George W. Russell (AE). The romance between Mary Poppins and the Match-Man reflecting Travers’s heart felt love for AE at that period in her life. (insert a link to previous post about AE)

McKernan combines other elements from AE’s life to support his interpretation of the story.  It appears from his research that young P.L. Travers nicknamed AE the “Match-Man” gently mocking his habit of leaving behind a trail of spent matches from the constant relighting of his pipe.

AE himself discussed his matches problem in a letter to his friend Lucy Kingsley Porter:

I think I’ll get my own matches in Letterkenny. I would exhaust any stock you would lay in. I know myself. It’s nearly a box of matches to one pipeful. Mrs. Law used to know where I had been painting when she found a box-full of burnt out matches around a center where I had been sitting. I will let you provide the floor space.

Bert’s painting of pictures on the pavement also supports McKernan’s interpretation of this fictional character. AE had many talents and painting was one of them.  He loved to paint landscapes as well as magical figures inspired by his spiritual visions, and he used to carry chalks in his pockets and draw on pavements, walls and rocks.

AE loved to spend his summer holidays in the northwest county of Donegal in the village of Breaghy, where he rented a room in a hillside cottage, Janie’s-on-the-Hill.  At twilight he would gather his crayons and sketch pad, and head for the hills. 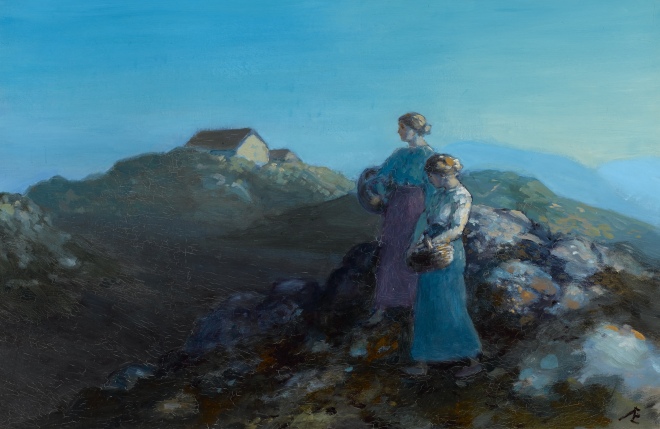 Young P.L. Travers accompanied AE on a few holidays during the 1920’s and went on painting excursions with him. She wrote about how he would paint “no sooner finishing one picture than starting on another. But one felt that this was less a series of emotional excursions than his way of finding out about the world he lived in.”

Once, AE offered P.L. Travers a paint-box, chalks and sketchbook affirming that if one has one gift then one has them all.

So, having arrived at his chosen position, a long yellow tongue of sand, laced with a thread of moving water that changed its colour as the sky changed, I sat beside him, making an occasional sweep of a crayon but more intent on watching his way of working than on what was in my sketch book.

The Death of AE: Irish Hero and Mystic, P.L. Travers

P.L. Travers not really interested in drawing herself, climbed on the branch of a nearby tree to observe AE’s crowding the canvas “with creatures from some other world”.  Somehow, busy as he was painting his visions, AE managed, without her noticing it, to sketch a picture of her resting on the tree branch.

…and there was I upon my branch, not at all a part of the scene but in a way a witness to it. As if one stood, unseen, at the portal of Paradise.

The Death of AE: Irish Hero and Mystic, P.L. Travers 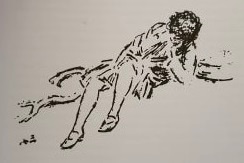 Maybe on that particular day she was not able to see what he saw but she did become part of the magical scene in the story Mary Poppins And the Match-Man.

Why then did P.L. Travers deny the love connection between Mary Poppins and the Match-Man? Well, by the time she wrote the stories for the first Mary Poppins book, her relationship with AE had evolved and deepened without ever becoming a romantic relationship. And, I also believe she had an additional reason. Mary Poppins had changed too and so had P.L. Travers.

In the first story Mary Poppins is not magical, the magic adventure clearly initiated by the Match-Man, and she dreams a very human dream of a life shared with a partner in a small house with a garden:

They passed a little red house with sun flowers in its front garden.

“Just the sort of little house I always wanted! said Mary Poppins kissing her white-gloved hand to it.

In the books Mary Poppins is no longer the shy young girl in need of a mentor. In the books Mary Poppins is herself the initiator of the magical adventures and the one dispensing the lessons. She is a self-sufficient, magical creature beyond the laws of our world. She is the “Great Exception”, the Starling in the story “John and Barbara’s Story” tells us. She is the only human who has transcended its human nature and accessed to a higher state of being.

P.L. Travers imagined Mary Poppins as a self-sufficient, independent and mysterious creature who feels at home wherever she goes. There is simply no place for the Match-Man next to such a powerful Mary Poppins. At least not in the mind of P.L. Travers.

Hope you enjoyed this post and that you will come back to read more about P. L. Travers and her magical Mary Poppins.